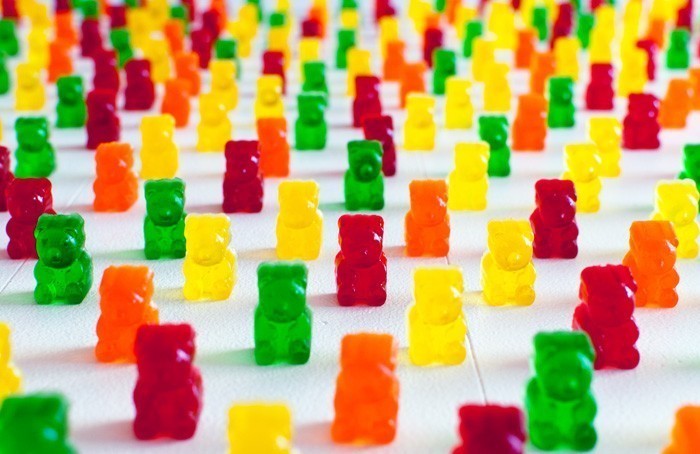 · They're called gummies, so where's the gum? ·

The nearly 100-year-old candy recipe can be easily replicated with Jell-O and a few other ingredients. But it's a little bit of food science that makes this gummy candy hack different than any other.

Two years later, he invented Gold-Bears, the gummy candy that would eventually make his company worth billions.

I spent several weeks figuring out how we can be just like Hans and make our own gummy candies at home, and I discovered that it’s not hard at all. The only special equipment you’ll need is silicone gummy bear molds. And a little patience.

The easiest way to make home gummy bears is to use flavored, sweetened gelatin; a.k.a. Jell-O. Fortunately Jell-O comes in all the flavors we need to make the same five flavors that are in a bag of Haribo bears.

If you want to make all the same flavors you’ll need raspberry, lemon, orange, pineapple and…another one. The green bear creates a challenge for us because it’s not the flavor you think.

Most people think it’s lime. But it isn’t.

And it’s not green apple, melon, kiwi, or any other flavor that makes sense.

In Hans Riegel’s world, green equals strawberry. If you want to know why you’ll have to ask him, which is impossible because he died a very long time ago.

Here’s where you need to make a decision: do you create gummy bears that look like Haribo gummy bears by using lime Jell-O for the green, or are you a flavor purist and will only consider using strawberry Jell-O, even if it’s red, so that your gummies taste the same?

I’ll leave that up to you, but for the sake of this blog, and since you can’t taste photos, I’m going with lime.

Haribo bears are formed in molds made out of compressed cornstarch. After the bears set up, the molds are shaken apart over screens and the bears are separated from the cornstarch, then cornstarch gets recycled and used again.

We are not using cornstarch molds today. That would be crazy. But we can use readily available silicone molds found online. Be sure to get the molds with 1-inch bears to make standard-size gummy bears. The bears will shrink by almost 25% after setting, so this size mold will make bears that are just over 3/4-inch tall, like the real ones.

In addition to Jell-O, there are a few other ingredients you’ll need.

Citric acid is an important ingredient in gummy candies to help wake up the flavor. Sour gummies use citric acid in the candy syrup and on the surface of the candy, but we need just a little here for the syrup. The acid also serves as a preservative and as something called an “interfering agent.” That brings us to the corn syrup.

You won’t find corn syrup in most homemade gummy recipes, and that’s too bad, because without it you get this…

Without corn syrup in this recipe your gummies will look and feel terrible in about a week.

Corn syrup adds sweetness to the candy, but its primary function in this recipe is as an interfering agent to prevent crystallization like what you see here.

Here’s how it works, but be warned: I’m about to get a little science-y on you. Don’t worry, it’ll be over quickly.

The corn syrup is a starch made up of a chain of glucose molecules that are smaller than the sucrose (sugar) molecules in the Jell-O mix we’re using. When heated, the string of corn syrup glucose molecules breaks apart and gets between the sucrose molecules, effectively interrupting the formation and growth of sugar crystals. You could say that corn syrup is like the wax paper you put between hamburger patties before freezing them. If you don’t use wax paper, all the patties will stick together and you end up with one giant, super-thick burger patty come grill time. That’s awesome for you, but then what’s everybody else having for dinner?

Conclusion: You need corn syrup or an invert sugar (even honey!) in gummies so that they stay soft and chewy.

Pour all the dry ingredients in a bowl and mix them together.

Then you can add the water and corn syrup.

This is where it really pays to be calm. You don’t want to create any air bubbles in the candy syrup, so stir this mixture gently until all of the ingredients are combined.

Don’t use a whisk because that will aerate the syrup.

An ordinary soup spoon is perfect for this.

The gelatin needs to re-hydrate, or bloom, so that it can do its magic. Give the candy syrup a rest.

When Hans made his first gummy bears in 1922 he used gum arabica to make them chewy. This rubbery resin from the acacia tree has since been replaced by more available gelatin, a protein-rich thickener containing 18 amino acids used in many foods such as marshmallows, soups, and salad dressings, and in other consumer products like vitamin capsules and photographic film.

Gelatin is pretty amazing stuff, but it needs time to do its thing. And it needs heat…

Your microwave oven is the easiest and quickest way to heat up the syrup so that the solid ingredients dissolve.

The trick is to heat up the syrup in stages. This way the syrup won’t boil, creating bubbles.

Now the syrup gets to hang out for a bit.

This will allow it to cool, and any tiny bubbles will rise to the top.

Every couple of minutes, give the syrup a gentle stir.

You should notice the syrup getting clearer as it rests.

To make sure your bears come out of the molds easily and in one piece, give the molds a quick spritz with oil spray.

The best way to pour the syrup into the molds is with a spouted measuring cup.

You may have received some droppers with your molds, but don’t use them. They add too many air bubbles to the syrup and the bubbles are impossible to pop.

For hacked gummy bears that look like the real bears—not too thick, and not too thin—it’s important to fill the molds properly.

Now you can take a break while the gummies set up.

After about 30 minutes you can move them to the refrigerator.

Push aside your Cheesecake Factory leftovers and make room for the two mold trays in your fridge.

The cold temp will help the gummies set up faster.

After a half-hour in the chiller, you can pop all of the gummies out the molds and arrange them upright somewhere out of the way so that they can begin to dehydrate and toughen up.

Standing them like this is the best way to maximize surface-to-air exposure.

You can eat them now if you like, but at this point they will be much softer than real Haribo Gold-Bears.

After a couple of days standing and one day lying down, your bears should become much chewier. The longer you leave them out, the chewier they will get.

When the bears are chewy enough for you, seal them up in an airtight zip-top bag or storage container.

If they begin to stick together, toss them with a pinch of cornstarch.

What other famous foods can be made at home? I’ve hacked over 1,100 iconic foods at TopSecretRecipes.com. Click here to find your favorites.

The nearly 100-year-old German candy recipe can be hacked with Jell-O and a few other ingredients. This recipe makes one flavor, but can be repeated for every flavor you want to include in the finished product.
Prep Time20 mins
Cook Time3 d
Total Time3 d 20 mins
Servings: 50 pieces
Author: Todd Wilbur

You will also need: 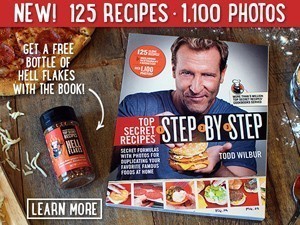